I took the train out to Cheste, on Thursday from downtown Valencia. It was maybe 30 minutes and there is a stop directly at the racetrack. Problem is…the racetrack grounds are HUUGE. I exited the train and saw only miles and miles of rental cars and basically no one on the roads! After walking in the general direction of the track, a girl on a scooter took me right to the front of the entrance.

It took a while but I figured out where to pick up my pass for the weekend. I hitched a ride with some Italians to the administration building and eventually made my way in…

The first pass, later upgraded for an even better pass. Notes for the italians - that's a drawing of a tire, part of italy and all our names

Once there I met up with my friend Francesco who runs the KTM 250 team and he gave me a Redbull hospitality sticker for my pass. I spent a lot of time there and it also got me into the Redbull rookies cup area.

Since there are no bikes on the track on Thursday, it was a day spent meeting with people and collecting phone numbers of people who could potentially help me with a job. Buying that phone was the best decision ever because I filled it with numbers!

Thursday evening I met Olaf, the European Arai rep in my hotel. He ended up driving me to and from the track for the next couple of days. He snuck me into the press conference for Sete Gibernau’s return to GP racing with the Onda 2000 team Friday night. I also attended the 10 year track anniversary party, which was really nothing more than opportunities for the press to take photos of the riders and some important people together, along with some kind of stupid statues that were supposed to be the riders but looked nothing like them.

Olaf and some other Dutch journalist at the press release

there are important people in this photo

Marc showed up late Friday night from France, and Melissa and Josh Hayes drove all the way out from Portugal Friday night/ Saturday morning and stayed in my hotel. Marc, Olaf and I met up with them at the track on Saturday.

Marc and I were able to watch Saturday morning practice from the Tech 3 Yamaha garages, and qualifying from KTM red bull 250 garage. Later that evening we visited in the Tech 3 garages and saw some interesting things on the bikes. 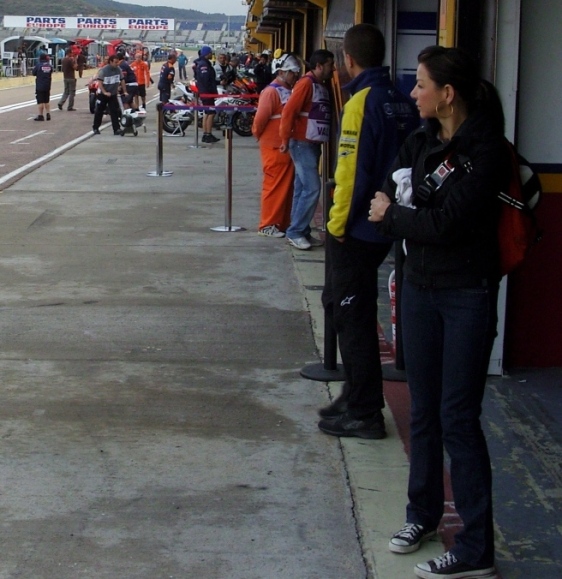 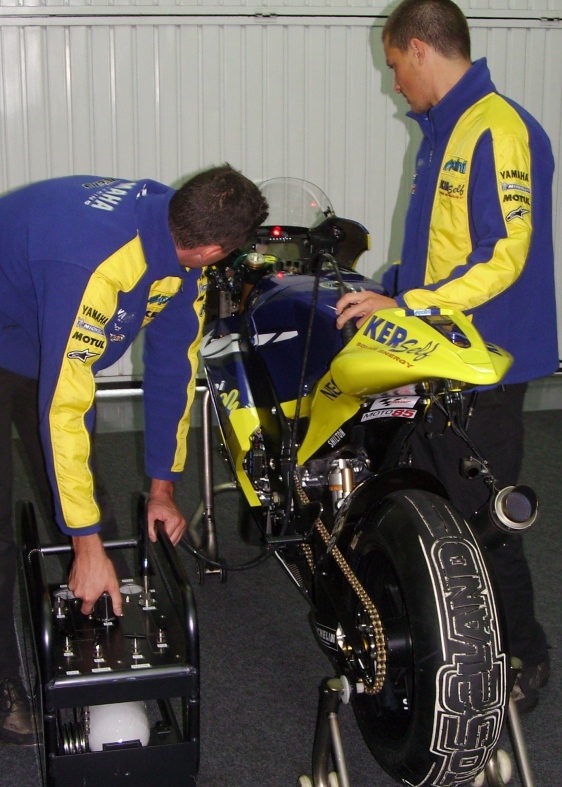 Saturday qualifying from inside the circuit:

Saturday after qualifying, the technical director Mike Webb escorted me into the Fiat garages so I could say hello to Jorge Lorenzo’s team that I worked for at Laguna Seca and Indianapolis. I needed an escort as the crowd outside the Fiat garages waiting for a glimpse of Rossi was so huge it was literally inaccessible at all times. The team was surprised and happy to see me, and amazed that I was speaking Spanish (albeit fairly basic and broken). I didn’t stay too long but it was a highlight of the weekend just being able to chat with those guys again.

The rest of the weekend I circulated and met with people, as this was my main reason for being there. I also ran into plenty of people I knew and caught up with them.

The races I got to watch from inside the track which was a treat for sure, though the premeir class race was fairly uneventful. Mike Webb gave me two tickets to the staff end of the year party, where I met Charley Boorman and (from Long Way Around/Long WAy Down movies with Ewan MacGregor), all of the Dorna guys I met at Laguna Seca, etc, etc. I stayed at until 5am, and when I left it was still in full swing…

One thought on “Valencia GP”