Finally, I am posting the rest of the photos from the Valencia race.

Some exciting things happened from Saturday afternoon on. First, my friend Nico’s team revealed their MotoGP racer for next year! Read more about it here. 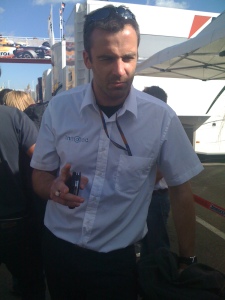 We had some lunch in the Yamaha hospitality and watched qualifying there. 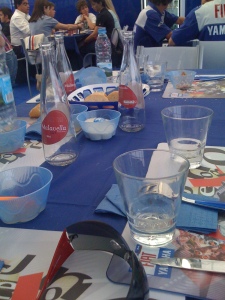 Oh, and VR’s father joined us there. 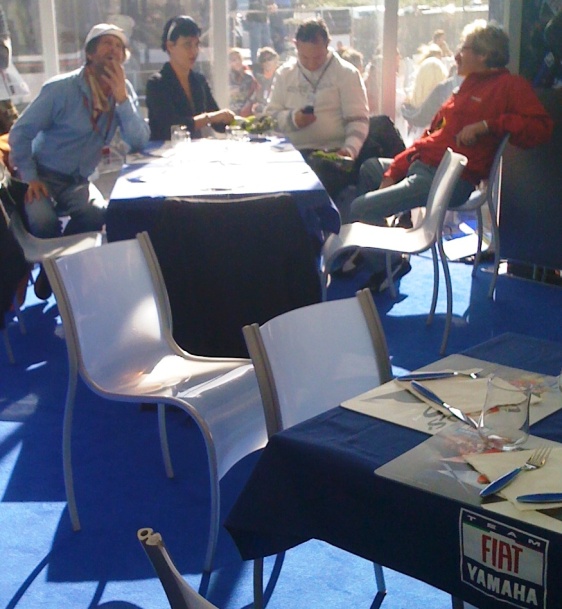 That night, we went out for paella with the Fiat sponsoring crew. Even though Paella was originated in Valencia, it was only so-so at this place. But the night was fun. 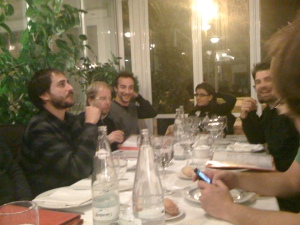 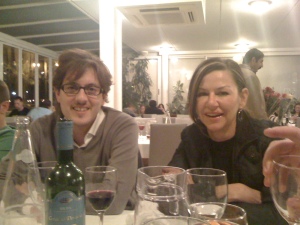 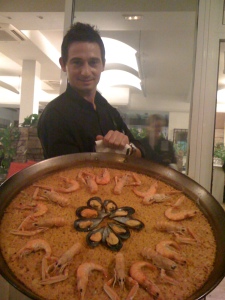 Sunday we watched the races from the Yamaha hospitality (well, Shanna watched some from the box). The normal end of the season festivities ensued, though on about 1/2 the scale from last year. There was no redbull present, no rookies cup, half the fans, half the riders, no privateer teams…it was smaller than last year. Also present was an overarching gloom over most teams, since many people lost their jobs this year and in fact did not find other teams to join. But the roaming band of terrible musicians made the rounds as usual and there were still crazy VR fans in all manner of wigs, yellow clothing and noise makers. 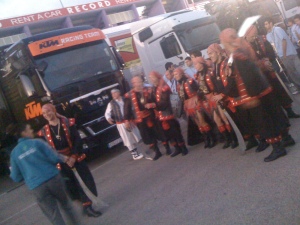 The wandering band in their circus outfits.

Then of course, the end of the year party. This year was better than last year, a bigger place, more people, and better music. Of course all the drinks were free, all night. I left at 6am. I had a good time. 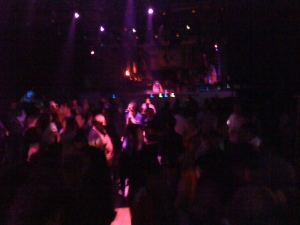 Monday we went to watch testing. The Moto2 bikes sounded great. Simoncelli rode his 800 like a 250 and I thought he was going to pitch it in every corner. Kenny Noyes was there testing his Moto2 ride for next year, and disgruntled Honda employees had to work another two days even after they had been fired. When the new crew rolled the ne w bike out, still under wraps, the laid off crew said, go ahead, take all the photos you want, we don’t care. It’s understandable that after 6, 8, 10 years one would be embittered when the thank you they get is their last paycheck, ever. 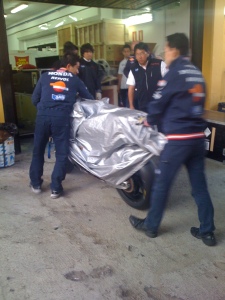 Next year, I will be going to the Japan GP. I will tell you with whom later. 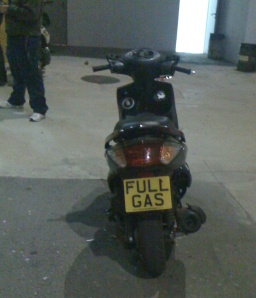 It’s the end of the year and time for reflection and planning for the coming year, so of course I have been thinking about the past 12+ months since I moved to Spain and evaluating all that has happened. I think now is a good time to update you all on “how I am handling things”, mainly because I am getting this question a lot lately. It’s over a year and a half after JM’s death and I think people feel like they can ask me this question now, like maybe my answer will be different than a year ago. I think everyone knew what the answer was a year ago, just by looking at me. Nonetheless, I appreciate the question.

Psychologically, we expect to outlive our parents and grandparents, so really, our entire lives subconsciously we are preparing for their deaths in a way. Of course we are never “prepared” and it does not make the loss any easier, but I imagine you do not experience the shock of losing someone you are supposed to live the rest of your life with. It is still disturbing how many people who knew JM do not even acknowledge in any way that he was killed when they see me, and never have. I just want you all to know, for future reference, that this is something you NEED to do at some point if someone you know has experienced the death of someone as significant as a spouse or sibling or child or anyone you are not supposed to, by design, outlive.

So…to answer the question. I’m doing pretty good. 6 months ago, I was not. But 6 months ago I spent a lot of time looking at my life and at myself, and finally allowing myself to experience a lot of pain, and, well… it helped.  I am looking forward to a lot of things and I am happy.  I recently got some ink that honors JM – I felt positively compelled to do it – and I am very happy with it, extremely happy with it in fact.  Sure, a tattoo signifies internal pain, (and I would be lying if I said this did not subconsciously reflect the loss I feel), but the imagery is very much me and not entirely obvious to anyone who did not know JM well as to it’s meaning, so it’s quite personal. And for some reason, it is very satisfying to have it. Maybe I will figure this feeling out later.

Now to answer the question everyone is really asking when they want to know how I am doing: I think I am finally emotionally able to have a real relationship at this point, with someone appropriate – not twelve years my junior or someone I know is entirely wrong for me or that I am not very interested in (in other words, safe because I would never have an actual relationship with them).  That being said, I will put it out there that I started dating someone I really like. I have known him for a year, he is a friend of a friend and he is of course involved in racing.

I think I will leave it at that for now, but thanks for asking.

For the last GP race of the year, a friend of a friend in San Diego flew out and stayed with me for a couple of days in Barcelona before we headed down to Valencia on the train on Thursday night. We had passes from Honda and I was to deliver a Snap-On cylinder camera to Gabriele who works for Hector Barbara’s team.

The first night we hit old town Valencia and met up with a friend of a friend of Shanna’s – a skate park designer/builder and his linguist professor skate rat friend. These guys had no interest in racing so we did not see them again but had a fun evening going to various bars before I headed back to the hotel to work while Shanna stayed out until the wee hours of the morning (hey, she was on vacation). 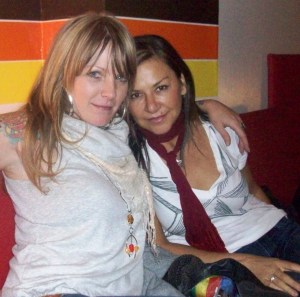 Shanna and I in some random punk rock bar

The hotel we found not only included free WiFi, it also included fellow Finnish compatriots of Mika Kallio who shared taxi rides with us to and from the track. We met them the first day in the hotel lobby and usually shared a late night drink with them since we were all on the same floor. Mika’s (tiny) brother came to visit and was intent upon convincing us that he is a much faster rider than his brother. With the Fins in the grandstand

Friday at the track I found Gabriele and he showed us 250 GP bikes in various states of preparation for the last 250 GP race ever. 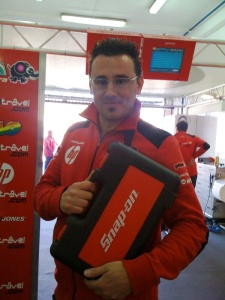 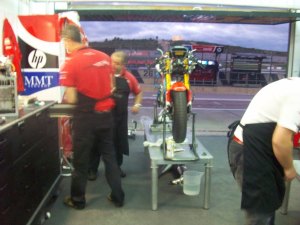 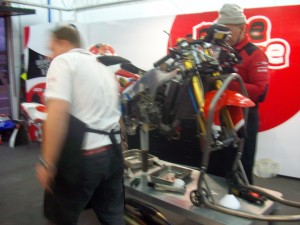 While this was sad and nostalgic, it was also exciting – Friday night they uncrated in the new Pons Moto2 bike for inspection in the garage. 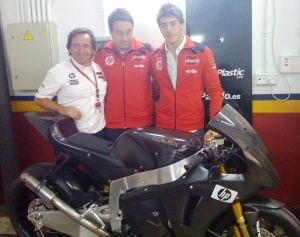 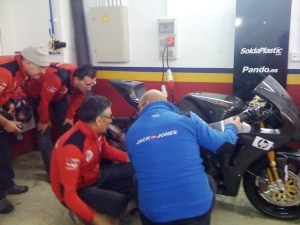 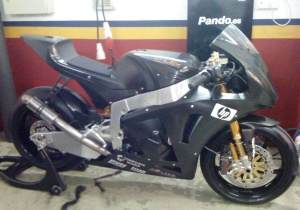 Then it was put on display in the hospitality the next day. 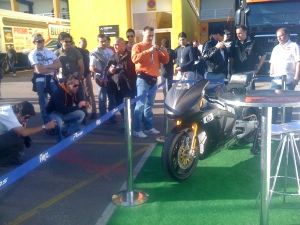 Next up – we dine in Fiat hospitality and have dinner with the Fiat PR and sponsorship group. To be continued…